It’s lookin’ like Spring outside, which has put me in a Springtime mood. I thought I’d share a bit about one of my favorite Spring designs.

This card started out as a simple sketch. Well, I guess it’s not that simple. I think I sketched this sometime in 2009, but I really didn’t work on it until the following year. (I find that I get in a scanning mode and scan in a lot of designs at one time, but then they just sit on my external hard drive for awhile, sometimes years, until I get around to cleaning them up. It’s nice because there’s always something ‘new’ to work on.) This sketch was done on regular white paper, first in pencil then traced over with a thin black pen. (I find that it’s easier to work with if I’ve traced it in pen). 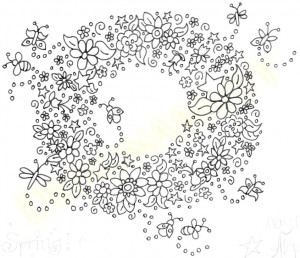 I used to clean up the image in Photoshop first. I’d try to erase any stray pencil markings or any noise that the scanner added. I don’t do that anymore. Now, I just import the scan directly to Illustrator. This image was not directly imported to Illustrator. I probably spent anywhere from 15 minutes to an hour cleaning the image up in Photoshop. What a waste of time! 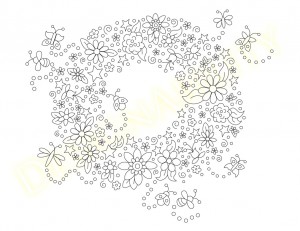 Two years ago I was learning how to use Illustrator. So, with my limited knowledge, this vector image probably took me at least four hours to complete. (CS2 isn’t the most helpful version of Illustrator, especially for beginners!) If I hadn’t learned the keyboard shortcuts for duplicating images (alt+click) it would have taken even longer! 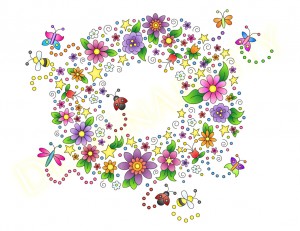 Once the vector was complete I imported it back into Photoshop. I now know that you can do gradients in Illustrator, but I really like and am comfortable with Photoshop for this. I would make a copy of the vector and rasterize it. Then I’d create a new layer underneath the rasterized layer and add the color to this layer. (I now know that I can select within the vector in Photoshop, so I don’t usually make a rasterized layer anymore.) I’d select what I wanted to color and then I’d expand the selection by a pixel or two and then add the color/gradient. With this picture I probably spent at least two hours on this process.

I love the final product though. I’m a fan of gradients. I think they really make the colors and the image itself pop! If you like this design you can find it in our floral stationary store.